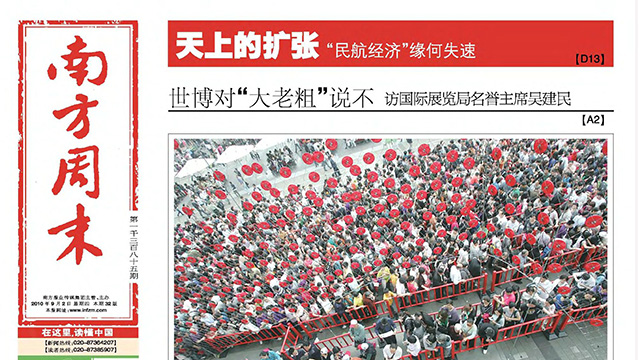 Guangdong deputy propaganda chief Zhu Yanfeng assured reporters that he would not allow this “illegal and unconstitutional stoppage of work” to affect the publication of the newspaper or its exalted reputation among liberal readers tired of government publications that treat them like gullible, mouth-breathing cattle.

“I have been on the phone with Roger Goodell and this is the way to go.”

As for the replacement journalists, he said, “I have been on the phone with NFL Commissioner Roger Goodell and he has assured me that this is the way to go.”

However, netizens have been quick to label the replacement editors as inexperienced, saying some of them have only edited high school newspapers and wouldn’t be able to handle the stress of putting together a national publication. They also point out that the new editor-in-chief is a 17-year-old with only two years experience as the style editor for No. 14 High School’s Lei Feng Daily.

Indeed, early proofs of this week’s issue revealed numerous incorrectly written characters and fact checking errors. But despite these concerns, Zhu stood by his young scabs.

“I have the utmost faith in our new journalists and editors,” he said. “They may not be the most experienced, but at the very least they know the difference between a touchdown and an interception.”