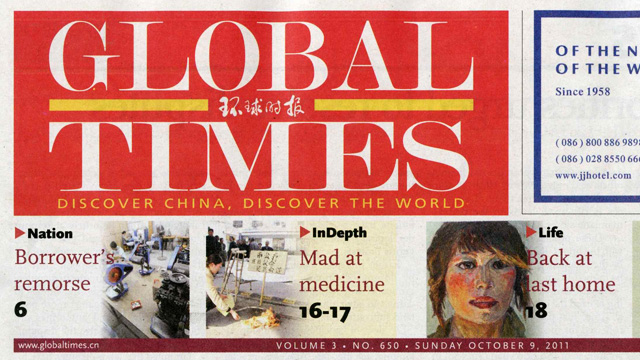 Freedom of the press must serve society

The Southern Weekly made a statement Sunday evening on its official Sina Weibo account, clarifying that the newspaper’s New Year Message in the New Year’s edition was written by editors at the paper.

Previously several editors had claimed the New Year Message had been altered by the publicity department of the Guangdong Provincial Committee of the CPC. The newspaper’s official clarification told a version that was totally different from the information that is quickly spreading online.

The Global Times also managed to confirm that the altered version of the New Year Message was not made by the local provincial publicity authorities.

However, the Southern Weekly’s official statement has failed to settle the matter. Some staff at the newspaper posted an open letter on Weibo to oppose the statement.

A closer look will find that former employees of the Southern Weekly and activists, including Chen Guangcheng, who is residing in US now, are among those who avidly promote the issue online.

For media professionals, it is clear that under the reality of China’s current state of affairs, the country is unlikely to have the “absolutely free media” that is dreamed of by those activists.

The development of media must be in accordance with China’s own situation. Media reform must be a part of China’s entire reform process. There cannot be a “special political zone” set for media. The Southern Weekly issue will not be concluded with a surprise ending.

Some activists outside the media industry in China have been inciting some media to engage in confrontation.

The past few days have seen some letters of complaints signed by the editorial staff of Southern Weekly circulated online, but these letters were not released through the newspaper’s official channels. Taking the Sunday evening’s official statement as a reference, it seems the issue has been mixed with rumors from the very beginning.

Those external activists are expecting direct confrontation between Chinese media and the current system. But nowadays, China’s attention is on developing the economy and improving livelihoods. The public doesn’t want to see uncertainty in the country’s future.

China’s media development needs reform. But media reform should be in line with China’s politics. We must actively and bravely promote media reform, but meanwhile, avoid radical reform that is out of step with political development and China’s reforms as a whole.

We hope readers support the Southern Weekly and cooperate to resolve the incident, not forcing it to play a role beyond its reach.