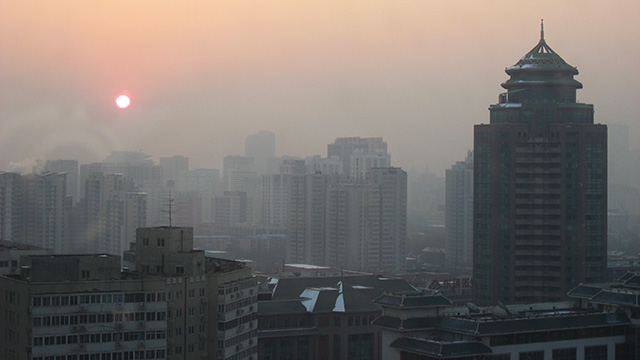 BEIJING — The Chinese government is on high alert today as an unidentified orb of light suddenly appeared in the sky over the capital city. This frightening scene caused officials to declare a public day of rest and warn citizens to stay at home and draw their shades.

Though details are still fuzzy, preliminary reports say that at approximately 7:34 AM, a glowing ball of fire appeared on the horizon and continued its transit across the sky as the day went on.

People’s Liberation Army jets have been scrambled to establish a zone of control around the city, ready to engage the silent, floating globe if it shows any sign of aggression.

“We don’t know what it is, but it’s safe to assume the Japanese are behind it.”

“We can’t take any chances,” press secretary Hu Bin told reporters from an underground bunker. “We don’t know what it is, but it’s safe to assume the Japanese are behind it.”

Researchers at the Chinese Academy of Sciences revealed that the mysterious, incandescent object was actually a sphere of luminous plasma, emitting electromagnetic radiation in the visible spectrum with a wavelength of approximately 500 nanometers.”

Scientists said in an official statement, “We believe that this ‘star’ is not a threat and could be beneficial to humans, but it is too early to tell.”

Beijing citizens are profoundly shaken by this phenomenon and wish for the return of the uniformly gray sky that they are used to.

Meanwhile, fringe Christian group Church of Almighty God is calling the ominous sign “a harbinger of the end-times” that will usher in “30 days of empyrean flame raining down from Heaven,” as foretold by scripture.

At press time, Beijing officials were asking factories and coal-fired power plants to run overtime in order to produce enough smog to block out the illuminated sphere.