Christian Right: “Hong Kong is No Place for Love” 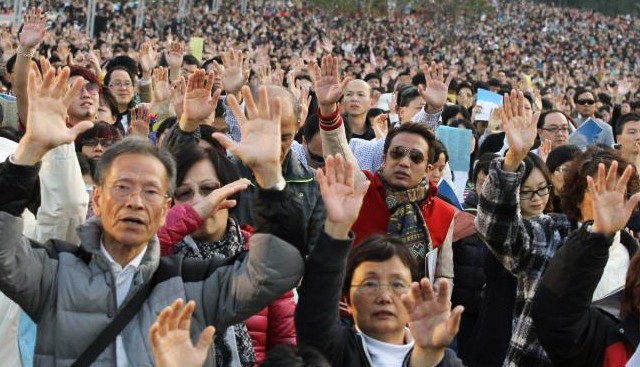 HONG KONG — During a rally in opposition to legislation to outlaw sexual discrimination, Hong Kong’s Christian right came out in force with one core message.

“Hong Kong is no place for love, tolerance or understanding,” keynote speaker Reverend Jayson Tam told a crowd of thousands. “If we wanted our children to grow up with the right to love whomever they want, we’d have moved to San Francisco after the handover like other free thinking people.”

“What makes Hong Kong great are the city’s noble traditions of intolerance and bigotry, traditions already fading in other Chinese societies,” Tam continued. “To abandon these traditions and embrace all peoples is to abandon our proud status as a bastion of narrow-minded pseudo-morality.”

“The British may have gone, but the outdated, ill-advised laws they perpetuated shall remain.”

“The British may have gone, but the outdated, ill-advised laws they perpetuated in the rest of their shrinking empire even as they abandoned them themselves, shall remain.”

Controversy over the city’s proposed anti-discrimination bill has sparked a series of rallies by Hong Kong’s influential evangelical Christian minority—well-heeled social conservatives who boast about their educational backgrounds while simultaneously accepting a literal interpretation of scripture disseminated by crackpot religious cranks who can’t get a real job.

Protesters demonstrated the superiority of Christian morality by publicly shaming gay couples, picketing gay businesses, and generally being assholes to anyone not wearing a ludicrously-proportioned crucifix or novelty T-shirt.

The Evangelical Free Church of China Yan Fook, the chief organizer of the rally, in conjunction with the Hong Kong Association of Interfering Mothers and the Campaign for the Preservation of Sham Marriages (Hong Kong), issued a formal statement shortly after Tam’s speech, claiming that: “Jesus Christ has chosen Hong Kong as the battleground for his lifelong war against love, acceptance and reasonable debate.”

“It is the job of the Evangelical Free Church to achieve Christ’s unfulfilled goal of ensuring that only those who conform to a narrow list of repressive social norms are permitted to flourish, while the rest are condemned to the fiery pit of Hell.”

“Jesus believed in free enterprise, the exploitation of the less fortunate, and the torture and humiliation of gays,” protester Richard Poon told reporters. “That’s what we want for Hong Kong.”

Local gay groups were, at press time, too fabulous to comment.


RELATED NEWS:
China's New World Map Claims Hawaii, Most of Micronesia
Macau Offers Citizens $10 in Chips to Celebrate Anniversary of Me...
What Are Our Chinese New Year's Resolutions?