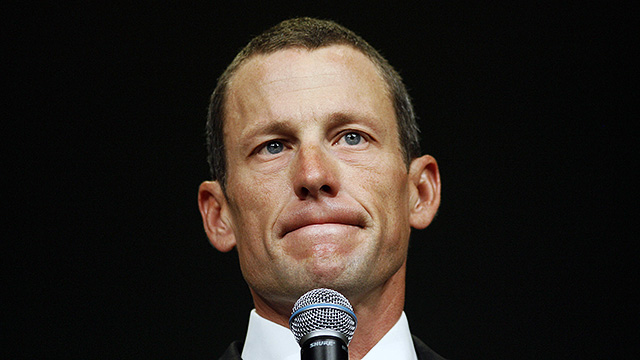 “I am sorry to admit to the American people that I spent a great deal of time and energy scheming about how to propel a pedal-driven recreational vehicle at ever greater velocities,” a penitent-looking Armstrong said.

“I thought riding a bicycle swiftly was a big deal, but it turns out that there are literally hundreds of millions of people who can do the same thing, many of them in China.”

Indeed, many Chinese cycle in much harsher conditions than switchbacks on the Alps.

“It’s not so easy to draft when there’s a taxi spewing exhaust in your face.”

“Tell that guy to try riding in 500 AQI weather,” said Shunfeng delivery guy Liu Zhiwen. “It’s not so easy to draft when there’s a taxi spewing exhaust in your face.”

Liu, who had never heard of the Tour de France, was incensed to learn that people actually got paid to ride around idyllic parts of France for three weeks.

“You’re telling me I get paid 100 kuai a day to deliver stupid shit from Taobao while these assholes are paid millions to see who can cheat the most?” Liu asked, incredulous. “Fuck that.”

The delivery man was also dismissive of Armstrong’s accomplishments.

“You call seven Tour de France wins impressive?” he continued. “I can get a fake iPad from Zhongguancun to Dawanglu in 20 minutes on surface streets. I bet Armstrong couldn’t do that even if he had his own mobile blood transfusion van.”

When confronted with this information, Armstrong said that he was glad to have gotten caught, because it finally made him realize that nobody gives a shit about professional cycling.

“I wasted all those years,” Armstrong said, his voice breaking. “If only I had focused on cheating in a sport that actually matters.”

UPDATE: It has come to light that Liu Zhiwen boosted his delivery times by wearing an air-purifying respirator. He has been stripped of all his Shunfeng Employee of the Month titles.