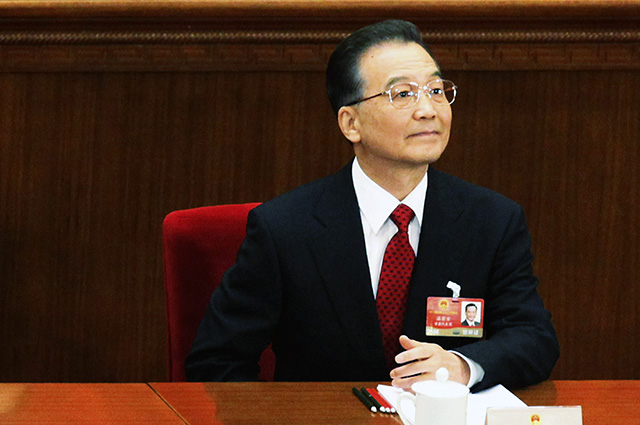 BEIJING — Premier Wen Jiabao (pictured above) spent most of today fidgeting awkwardly in his seat, trying to keep his diamond-studded Rolex watch out of sight of the cameras, for fear of stoking rumors that he and his family are fabulously wealthy.

According to sources, Wen was shaken by the recent trend of  Chinese netizens using Weibo to publicize and shame official extravagance but didn’t want to look penurious in front of his colleagues.

However, every time he reached for his teacup, the pavé-set dial of his brilliant, yellow gold special edition Datejust Rolex would peek out from under his right sleeve. But when he tried to tug the sleeve over his watch with his other hand, his solid silver Cartier cuff links were almost exposed to the cameras.

With photographers taking pictures of him the entire meeting, he had no choice but to hide his right hand under the table for the duration of the session.To check the time, Wen would crumple up a sheet of note paper and throw it at President Hu Jintao, who was sitting next to him. Hu then gave a clandestine glance

As the day wore on, Wen tried to excuse himself to the bathroom but realized that if he got up, netizens might be able to identify his bespoke Thomas Pink suit and hand-stitched calf leather shoes from Hermès.

After holding it for three hours, the premier was seen ducking into a back exit after the meeting and racing home in his tricked-out Bentley Continental GT to take a leak.