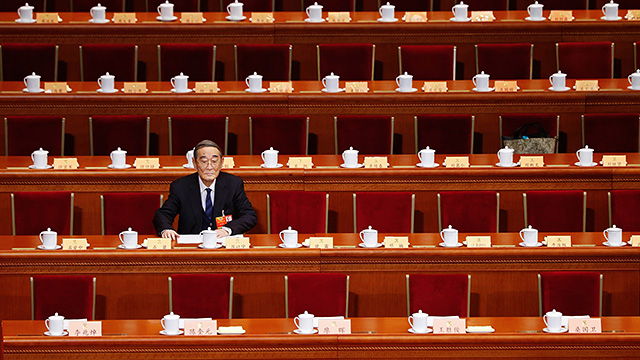 BEIJING — After a smooth and successful first week, the National People’s Congress could be derailed by a sudden shortage in the supply of rubber stamps. According to official sources, a freighter carrying rubber stamps made specifically for congressional use capsized in the Bohai Sea, threatening to disrupt the brisk pace of the meetings.

Deputies are concerned that without those stamps, they will not be able to silently acquiesce to predetermined policy decisions as efficiently.

“Without the means to mindlessly pass legislation, we might find ourselves in a meaningful conversation regarding the future of the country.”

“If those stamps don’t get here before we vote, I don’t know what we’ll do,” said Liao Shengyu, a junior NPC deputy from Jiangxi. “Without the means to mindlessly pass legislation, we might end up debating policy or find ourselves in a meaningful conversation regarding the future of our country.”

“That would be terrifying,” he added.

But the lack of bureaucratic props is not the only problem that could jeopardize the session. Deputies are also reporting an alarming dearth of empty promises and arbitrary performance targets.

“After issuing promises for 30 years and never fulfilling any of them, we’ve run out of things to say,” compained one delegate who wished to remain anonymous.

Indeed, high-level government officials have found it increasingly difficult to make up goals and benchmarks for development they haven’t already failed to achieve. Perhaps that is why Xi Jinping’s administration has decided to focus on “reducing cavities significantly” and “eliminating all dog-related deaths by 2020.”

As for the rubber stamps, NPC organizers are trying to borrow them from the Chinese People’s Political Consultative Conference.

“It’s not as if they need them,” said deputy Liao. “They don’t have any real power.”