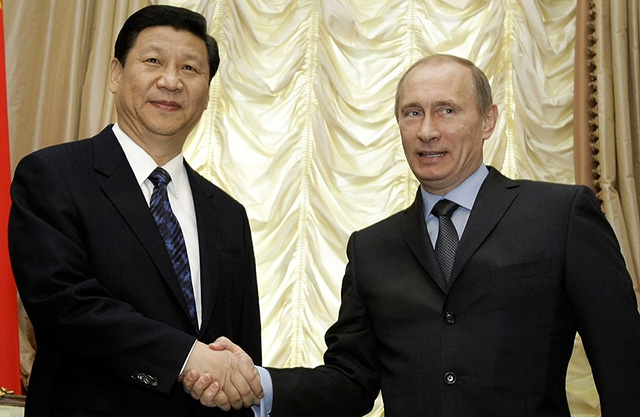 MOSCOW — An autocrat and a mafioso met in the capital of the world’s largest protection racket yesterday to congratulate one another on their recent undemocratic and iron-fisted seizures of power, lording it over the common man with utter impunity.

Both men also high-fived over their shared sense of admiration that, in an increasingly democratic and free world, they could continue to trample the working class while simultaneously cultivate a benign and streetwise image through their corrupt and uncontested control of their territories’ respective media outlets.

“This plutocrat has risen through the ranks of an unaccountable and self-regulating group of special interests which does not need to consider the feelings or needs of anyone except its own bloated, out-of-touch members, to wield supreme power,” said the mafioso.

“He truly is a man after my own black, twisted and barely-beating heart.”

“This mafioso has always been a friend to robber-baron dictatorships like the one I claim to represent.”

“This mafioso has always been a friend to robber-baron dictatorships like the one I claim to represent,” responded the plutocrat. “It is for this reason I choose to hang out with him and his cronies, rather than legitimately elected heads of state responsible to their own people.”

“This carefully groomed clique of elderly men have all the social conscience of a diarrhetic cat at a carpet convention.”

Both the mafioso and the plutocrat have deepened ties between their respective crime families in recent years, exchanging tips on how best to milk every last nugget of gold out of those less fortunate than themselves, maintain their respective cults of personality and use their secret police to muzzle the merest hint of criticism among the people or their own sniveling lieutenants.

They have also reportedly bonded over a shared love of Italian crooners and cognac.

Following the joint press conference, to which only journalists in the direct employ of either the mafioso or the plutocrat were granted access, both men posed shirtless for a series of photo-ops, including one with a freshly-shot brown bear, another showing them riding horses over a frozen lake, and a final picture where they were draped on top of an ivory piano played by a nude Alicia Keys.

Later, the plutocrat was invited by the mafioso to a luxurious meal of caviar-stuffed blue whale ovaries, roasted haunch of giant panda and pierogi made from gold leaf and stuffed with black truffles before withdrawing to a shark tank lounge for cocktails with a group of long-legged Russian supermodels.

After spending the night at the mafioso’s secluded mountaintop villa, the plutocrat announced he would be traveling to Africa to meet with other “kindred spirits.” We have confirmed that these men are, in order, an embezzling militarist, an AIDS-denying polygamist and a child soldier-loving warlord turned voodoo priest.