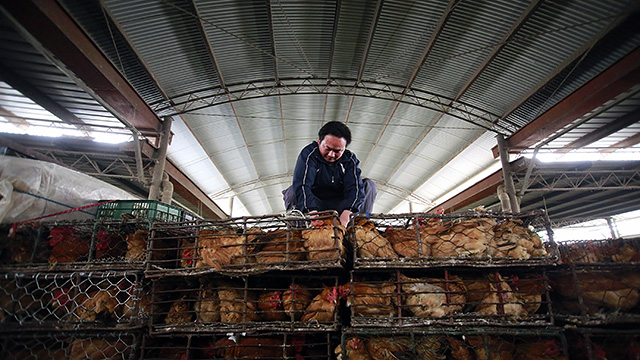 Posters and billboards have gone up around the city depicting Shanghainese eschewing disease-ridden meat, fish and fowl, opting instead for fresh fruits and vegetables.

As part of the media blitz, Deputy Mayor Zhang Yueran called a press conference today, where he extolled the virtues of veganism, saying, “Since last month, I have always believed that veganism is an ethical way of life suited to modern China, what with all of its spontaneous animal deaths and constant threat of pandemic.”

When asked why the city was promoting veganism over vegetarianism, Zhang replied that another melamine scandal involving eggs or milk powder was “bound to happen sooner or later.”

But the deputy mayor warned that even strict veganism couldn’t ensure one’s survival.

“With Shanghai’s luck, we’ll probably be the first to discover an eggplant retrovirus that decimates the population,” he said glumly. “Or that our produce contains trace elements of poisonous chemicals from pesticides or polluted groundwater that was used to grow it.”

He sighed. “Maybe it’s best if you lay off food altogether until we figure this thing out.”

Lastly, Zhang urged citizens to euthanize their pets—“To trust an animal is folly”—and advised those who refuse to Go Vegan™ to stay away from other humans.

In other news, Whole Foods stock jumped eight points after announcing they would be opening 20 stores in Shanghai by the end of the year.


RELATED NEWS:
Chinese Officials Leave Earth to Avoid End of the World
Delicious Smell of Bacon Now Wafting from Every Faucet in Shangha...
Xi Jinping Delivers Two-Hour Speech Consisting Entirely of the Wo...