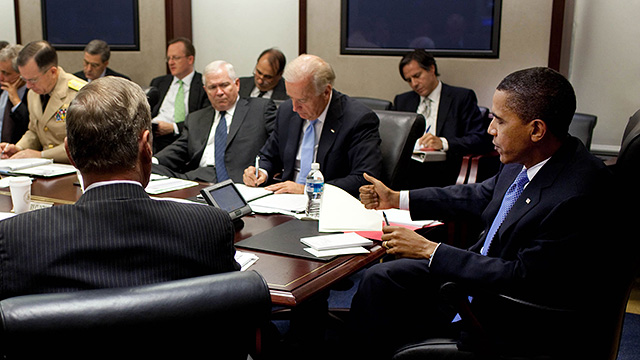 WASHINGTON — After one of the most traumatic weeks of his presidency, with a terror attack in Boston, a lethal explosion in West, Texas and the ignominious defeat of a gun control bill, U.S. President Barack Obama launched part of the American nuclear missile array at North Korea Friday night, effectively destroying the entire country and drawing a line under the Kim dynasty.

In a video from the White House Crisis Room, broadcast on all U.S. television networks at 9:00 p.m. EST, the president, visibly haggard, addressed the nation before obliterating the tiny East Asian dictatorship.

“My fellow Americans,” he began. “This week has seen our nation, and my administration, pushed to the very limits of endurance.”

“And, to be honest, I’d had enough,” he continued, before sipping from a Styrofoam cup of instant coffee. “Then this morning, Kim Jong-un issued yet another threat against the U.S.”

“Any other day,” the careworn Commander in Chief intoned, “I might have just shrugged it off. But not today. To be perfectly frank, the U.S. and her allies don’t have time for this horseshit.”

“Fuck it,” he added. “Fuck it all to ball-sucking, tit-licking hell.”

Obama then pressed the bright red button in front of him labeled “OBLITERATE,” which authorized the U.S. Pacific Fleet’s nuclear-armed submarines, along with missile bases in the Midwest and Guam, to launch a full-scale nuclear strike against the North Korean mainland.

Pyongyang, the seat of the North Korean government’s power, was immediately destroyed, as were 90% of the country’s military bases, armed personnel and industrial concerns. Some 18 million civilians also died in the blasts.

“There,” Obama said. “It’s done. Now we can get on with our goddamn lives. God bless America, and may God have mercy on my soul.”

“We’re not going to press the matter,” ran the 12-word response to the single largest and most devastating nuclear attack in history. “That guy [Obama] has suffered enough.”

White House sources later claimed that a “Thank You” card, signed by the entire Politburo and the PLA chiefs of staff, was later delivered to the Oval Office.


RELATED NEWS:
Santa's Sleigh Shot Down Over East China Sea
This Is No Way to Handle a Tragedy
PLA Navy Withdraws from North Sea After Scotland's "No"...