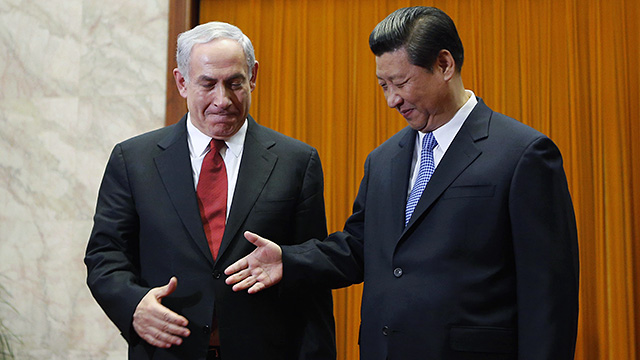 This week, Palestinian President Mahmoud Abbas and Israeli Prime Minister Benjamin Netanyahu were both in Beijing and met separately with Xi Jinping. Here are the minutes from Xi’s meeting with Netanyahu on Thursday.

10:00 am — Meeting off to awkward start as Xi tries a handshake/pound maneuver (pictured above) that Netanyahu can’t follow.

10:12 am — Netanyahu asks, “So how does China avoid being hated by all its neighbors?”

10:21 am — Netanyahu dismisses North Korea as “an irascible country, created by fools who thought partitioning land could prevent conflict, which dares to attack its neighbors only because a world power backs them financially, diplomatically and militarily” without any apparent irony.

10:38 am — Xi doubles down by calling him “Beebs” instead. Netanyahu laughs; diplomatic crisis averted.

10:50 am — The two leaders bond over using hypocritical, self-serving readings of history to claim territories lost centuries, if not millennia, ago.

11:17 am — Xi admits to meeting Mahmoud Abbas earlier in the week but says that “it didn’t mean anything” and that Abbas was “like, totally weird.”

11:18 am — Netanyahu starts talking shit about Palestine, finds it hard to stop.

11:29 am — In a flourish worthy of Jerry Springer, Xi reveals that Mahmoud Abbas has been listening backstage this entire time. Abbas walks out to jeers from the studio audience.

11:30 am — Netanyahu, Abbas and Xi talk calmly and rationally about a possible two-state solution and what China can do to help maintain stability in the region.

11:59 am — Netanyahu and Abbas make vague statements about how they believe in peace and promise to call each other some time.

12:00 pm — The three men shake hands—this time Xi connects on his handshake/pound—and celebrate by going out to get falafel.