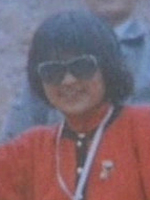 Sun Wei was Zhu Ling’s roommate at Tsinghua University both times she was poisoned.

Stay with me for a minute.

Let’s say I had a college roommate who was beautiful, smart and an accomplished musician. And let’s say, oh I don’t know, I was jealous of her looks and ability and someone asked me, “If you had to poison your unbearably perfect roommate, how would you do it?”

First, I would call the police and report the matter. Poisoning someone is a serious crime.

But let’s just say, for the sake of argument, this person put a gun to my head and I had to come up with an answer. Well, in that case, I’d definitely choose thallium.

Here’s why: first, I used to work in a lab at Tsinghua and regularly came into contact with dangerous compounds and thallium was easily accessible.

Two, thallium is toxic in small doses, easily soluble and nearly tasteless so it would be trivial to drop some in a drink and hand it to an unsuspecting roomie.

Third, thallium poisoning causes intense pain and hair loss, a fitting punishment for someone who was always the center of attention.

For these reasons, I strongly believe that there’s no better choice for getting rid of your overachieving roommate than thallium.

But what if, for instance, they survive the attempt on their life because you didn’t use enough thallium? What then?

Well, if this happened, and the roommate recovered and returned to school, I’d probably—and I’m just riffing here—lie low for a while, then poison her again three months later.

Not that anyone would ever act upon these repugnant desires, but if they did, I’d advise them to have a plan B. You never know what might go wrong when you’re trying to kill someone.

In the unlikely event that your target evades death for a second time, a good plan B, for example, would be to use your family connections to quash the police investigation, then enter into a sham marriage and emigrate to a country with no extradition treaties with China, like United States.

Anyway, if I had to poison my roommate and get away with it, that’s probably how I’d do it. Yup, that’s exactly how I would.