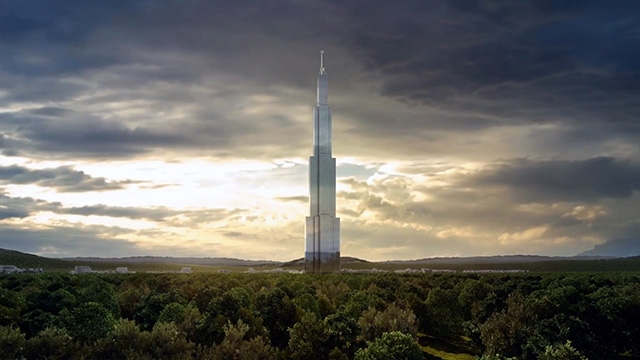 CHENGDU — At a formal ceremony this morning, Ge Honglin, the mayor of Chengdu, broke ground on a 30-square-mile patch of land outside the city, upon which developers plan to construct the World’s Biggest Thing by December of this year.

Wearing a hard hat, Ge announced to assembled party dignitaries that “this Thing will be a symbol of the dynamism and vivacious business climate in Chengdu, setting a new bar for all future Things.”

“The Thing will attract tourists, political leaders and investment from all over the world,” he went on. “No Thing will come close to this Chengdu Thing.”

“No Thing will come close to this Chengdu Thing.”

According to developer Future Green Mighty Thing Development Co., Ltd., the proposed Thing will be constructed from a mixture of concrete, glass and steel, and rise 700 feet into the air.

The entire Thing, set in landscaped grounds, will boast a footprint of 28 square miles and be visible from space, making it the largest Thing ever made by man.

In keeping with Chinese traditional city planning, however, it will only have one decent bar and really slow Internet connections.

In terms of both scale and facilities, Chengdu’s World’s Biggest Thing is far more ambitious than even Dalian’s Extremely Large Object, which was proposed by disgraced politburo member Bo Xilai during his tenure as that city’s party secretary but mothballed after his arrest.

When asked if the Thing could be repurposed to help alleviate Chengdu’s chronic overcrowding problems caused by unsustainable urbanization, Mayor Ge responded, “Things aren’t as simple as all that.”