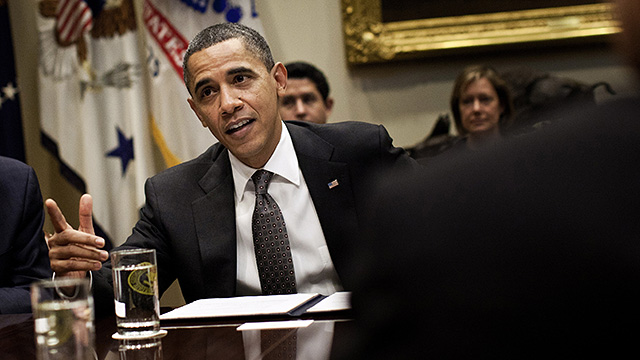 “Our relationship with China is on a knife’s edge,” Obama said, citing the trade deficit, ongoing territory disputes in the South China Sea and the string of hacking scandals. “The last thing we need is Joe Biden in the mix.”

Recently, Biden made waves when parts of a commencement speech chiding China and its leader went viral in China, precipitating Chinese students to demand a public apology from the vice president.

“God help us if he does his ‘Chinaman’ character.”

“If Joe calls Xi ‘Tubby’ to his face, it’s all over,” the president cautioned. “And God help us if he does his ‘Chinaman’ character.”

Obama told his advisors that he has packed the vice president’s schedule with state dinners and given him a “really hard Sudoku book to finish,” but that it is “our collective responsibility to keep Joe Biden away from California, no matter what.”

When asked how serious he was about keeping the gaffe-prone vice president away from his meeting with Xi, Obama told those gathered with him that if Biden gets within 30 yards of the Chinese president, “you have authorization to use lethal force and bring him down.”

Sources present at the briefing claim that the president has asked the CIA to dispatch several Predator drones to tail the vice president.

“Not that I have an issue with using drones to kill Americans,” he said. “But let’s hope it doesn’t get that far.”


RELATED NEWS:
Let Us Choose the Next Guy
Yao Ming Shot by Poachers
China Pulls All Copies of "The Interview" from Pirated ...