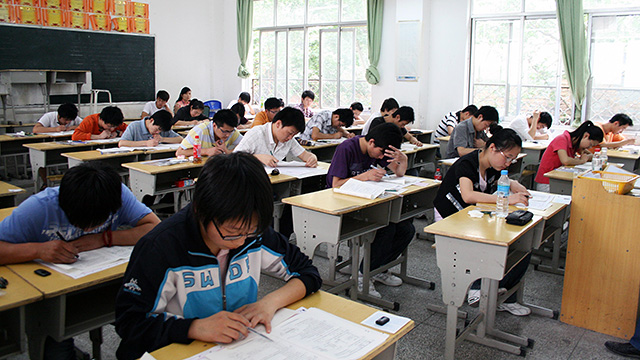 BEIJING — Gaokao proctors have finally finished removing the withered, broken corpses of students from examination halls across the country, following one of the bloodiest and most protracted college entrance examinations in Chinese history.

The average casualty rate of the gaokao hovers around 10 percent but this year’s examination was particularly brutal due to the conflation of the particle physics and medieval French modules into a single 30-second test in which Chinese students had to translate a passage from Hans Bethe into late Occitan.

This change alone is estimated to have caused an additional 126,000 deaths during the second day of examinations.

China’s gaokao, in which all eligible students simultaneously take a series of challenging examinations which will determine their entire educational future, has come under fire for the number of deaths from exhaustion, dehydration, suicide and carpal tunnel syndrome during the exam period.

A number of students perished due to the new trend of not sleeping between junior high and college.

A number of students perished from overwork even before reaching the examination hall, due to the new trend of not sleeping between junior high and college in order to maximize study time.

Once in the examination hall, many students simply crack under the accumulated pressure of five years of uninterrupted memorization. Brain aneurysms are still the number one cause of death, accounting for 42 percent of in-exam casualties. However, 30 percent of deaths during this year’s gaokao were attributed to blood clots from overworked hands traveling into students’ brains.

Several thousand committed suicide shortly after leaving the examination hall, some leaving notes claiming they “didn’t know how to be a person anymore.”

The rising death toll, and increasingly messy cleanup process, has led some teachers to question the severity of the gaokao.

“Sometimes, when I’m lugging the bleeding, red-eyed corpse of a once-hopeful student to the campus incinerator, I wonder if perhaps the gaokao is a little too harsh,” remarked teacher Liang Weiliang. “Perhaps we could ease off a little—maybe lose the requirement that students jog on the spot while reciting pi to 2,000 places, or the insistence that they write answers to the Mao Zedong Thought exam in the blood of a classmate.”

However, calls to relax the gaokao and introduce more coursework-based assessment have been roundly rejected by Chinese authorities.

“While these deaths are regrettable, a single, multiple-choice examination is the only way to assess a person’s worth,” said education minister Wu Qing at a press conference Monday.

He added, “Without the gaokao, teachers would be forced to look objectively at the whole student, their hopes, dreams, skills and ambitions. We cannot allow our time-honored fetishization of rote learning to fall by the wayside simply to save lives.”

“That would be an insult to centuries of Chinese education.”