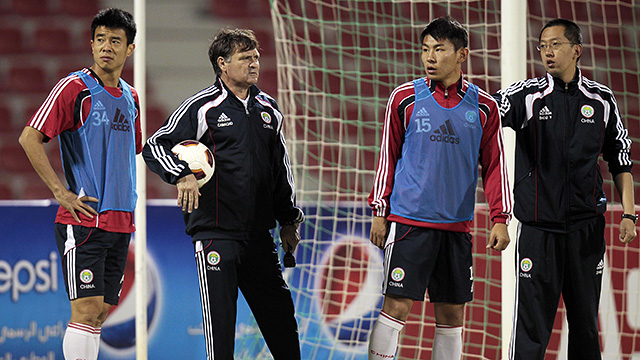 BEIJING — Following their embarrassing 5-1 loss to Thailand two weeks ago, China’s much-maligned national soccer team suffered another humiliating defeat on Sunday, this time at the hands of a highly organized band of feral cats.

“After the loss to Thailand, we thought we’d pick an easy opponent, lick our wounds and build back our confidence,” said head Spanish-born head coach José Antonio Camacho. “But make no mistake: these cats were extremely well-trained.”

Though the Chinese national team is widely ridiculed by Chinese fans and has failed to qualify for the World Cup since 2002, this is their first loss to a group of animals.

In Sunday’s match, the national team jumped to an early lead, scoring their first and only goal in the 13th minute, before the herd of alley cats rallied and set up a defense that the team couldn’t crack.

“We couldn’t even get a shot on goal in the second half,” said a frustrated Camacho. “The cats started hissing every time we got close to the net, which frightened the players.”

In the 58th minute, Whiskers, the felines’ aggressive right wing, caught a breakaway pass and blew past two defenders to score the equalizer.

Then in the 82nd minute, Xiao Hei, a large spotted tabby, found Mittens inside the box who fired a bullet to the corner of the net. The final score stood at 2-1.

Critics who would normally accuse the national team of collusion are stunned by the loss.

“Ordinarily, I’d say for sure that the national team took bribes to throw the game,” wrote one microblogger. “But what could a pack of stray cats possibly have to offer?”

Coach Camacho stood by this assessment.

“There’s no reason to assume misconduct,” he said. “We truly thought we stood a chance against this ragtag team of feral cats.”

He concluded, “I hope fans will finally begin to see the truth—that we really are just this bad.”