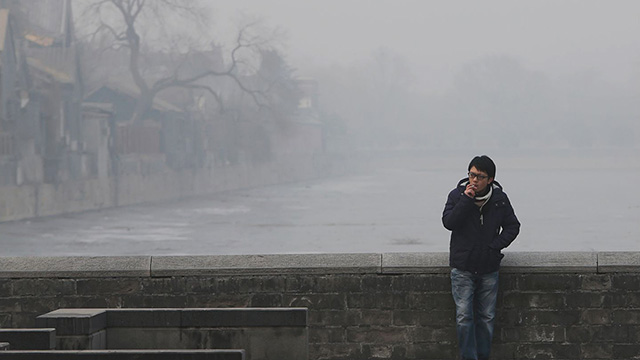 The landmark announcement comes on the heels of a 412-page study on Beijing air released last month by the Ministry of Health entitled “Effects of Prolonged Inhalation of Beijing Air on Health.” The report was based on 86 peer-reviewed papers, interviews with over 300 academics and examinations of more than 5,000 HEPA filters used in Bejiing homes.

What the study found was shocking.

Not only was long-term intake of Beijing air linked to higher rates of asthma, respiratory illness and smelling like soot all the time, researchers found that Beijing air also has a near 100% addiction rate.

“Little did we know, the air in Beijing is far more addictive than cigarettes, cocaine—even that blue meth in Breaking Bad,” the report said. “Once people start breathing it, they literally don’t stop until they’re dead.”

In light of these conclusions, the municipal government will require all air in the city to bear warning labels from the Surgeon General which read, “Inhaling can be hazardous to your health,” and “Breathing causes lung cancer.”

The government is also considering adding graphic photographs to Beijing air to deter would-be breathers. The proposed images depict the city at its most polluted, blanketed by a stratum of haze where one can hardly see the building across the street, the sun but a faint glow in the miasmic soup.

But not everyone is convinced by the ministry’s report. Indeed, the study’s findings are being disputed by Beijing air manufacturers, who say that there are no conclusive links between higher incidences of lung cancer and Beijing air. Nor, they say, is there any evidence to suggest that Beijing air is addictive.

Lobbyists representing Big Air argue that Beijing’s air is already heavily taxed and that if it were forced to carry a warning label, people wouldn’t want to breathe it anymore.

Li Hui, the president of the Gray Skies Initiative, a lobbying firm that promotes the health benefits of PM2.5, said that people also misunderstood the nature of PM2.5.

“People think PM2.5 is completely bad for you, and that’s just not true,” he said. “Did you know that PM2.5 also contains iron and zinc and sulfur, three minerals essential for biological function?”

Cao Haizhe, a researcher at the think tank Harmonious Future Institute, saw it as an individual rights issue.

“Breathing is a choice, one protected by the Chinese constitution,” Cao said. “If we allow the government to take away our right to breathe unclean air, next they’ll be telling us to stop eating gutter oil or that melamine isn’t part of a balanced diet.”

The only effective way to prevent exposing oneself to the dangers of Beijing air is to stop breathing.

More controversially, the Ministry of Health report claims that the only effective way to prevent exposing oneself to the dangers of Beijing air is to stop breathing. The report likened the health risks of breathing a week of air in the municipality to “rolling up and smoking a sheet of fiberglass insulation.”

“We need parents to take the lead and stop breathing,” the study advocated. “Help us educate younger generations by setting a positive example.”

But quitting breathing is easier said than done.

One local man, teeth stained yellow from years of respiration, said that he’d been trying to quit cold turkey for months, but the longest he could go was for a couple of minutes before he passed out from holding his breath.

Despite this, the Beijing municipal government is encouraging restaurants to go one step further than offering breathing and non-breathing sections and ban breathing inside public places altogether.

“We need the help of SARFT as well,” Wang said. “We need movies and television shows to stop portraying breathing as ‘cool’ or ‘rebellious.’”

Though legislators believe the anti-breathing laws needed to save the city from a public health epidemic are far from possible, they think banning pro-breathing ads is a promising start. As of now, an estimated 20 million people are still addicted to Beijing air.

In other news, warning labels on cigarettes sold in Beijing have been changed to read, “Smoking one pack of cigarettes is equivalent to breathing 24 hours of Beijing air.”