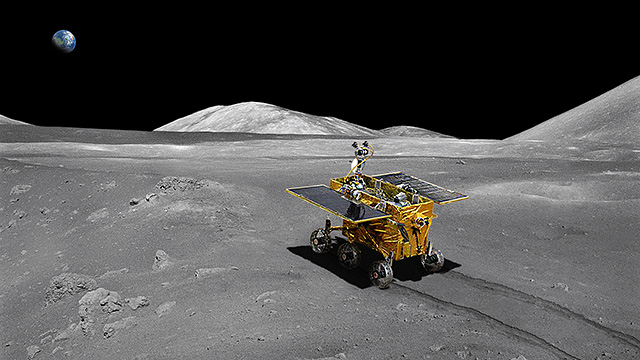 BEIJING — Just days after Jade Rabbit’s historic moon landing, incriminating photos have surfaced which show China’s rover littering and writing its name in the Bay of Rainbows, reigniting an old debate about the behavior of Chinese tourists abroad.

Newly released photographs from the Hubble Space Telescope clearly show the rover using tire tracks to write “Jade Rabbit was here” in Chinese characters across the lunar basin. Other photos show a Hansel-and-Gretel trail of food wrappers and cigarette butts behind the six-wheeled vehicle.

“Why does this happen every time Chinese people go somewhere new?” asked one user on Weibo. “When will we Chinese be able to travel without embarrassing ourselves?”

The Chang’e-3 lander has also been the target of criticism for discarding its landing apparatus carelessly in the basin.

“The images it has uploaded so far consist primarily of selfies.”

“This family of idiots can’t even be bothered to pick up after themselves,” fumed another user. “Next time, they should just stay on Earth.”

Moreover, Jade Rabbit has shown a complete lack of interest in understanding its new surroundings, zipping from one crater to another without so much as examining the geological origin of the impacts.

The rover has, however, been flooding its WeChat feed with pictures from the moon, according to sources close to the machine.

“It definitely has been taking pictures,” said Guo Jutian, a mission specialist with the China National Space Administration. “But not of anything meaningful. The images it has uploaded so far consist primarily of selfies.”

More damningly, the rover was seen chipping off parts of a billion-year-old rock face and hiding the artifacts inside its chassis, ostensibly to analyze their chemical composition.

“After all, the moon is one of the only places Chinese citizens can travel to without a visa.”

“This kind of behavior is utterly unacceptable,” Guo said. “Jade Rabbit is causing the entire Chinese people to lose face.”

But gauche behavior on the part of lunar rovers is not unique to China. The Soviet Union’s Lunokhod 1, the first rover to land on the moon, was infamous for its aggressive personality and propensity to binge drink. America’s Apollo Lunar Roving Vehicle, on the other hand, was much larger and heavier than its Chinese counterpart.

Though the Chinese public has been quick to chide Jade Rabbit, there has been no official response from lunar authorities. Zhang Jun, who heads a large travel company in Beijing, believes that it is in the satellite’s best interest to attract more Chinese visitors.

“They realize there’s a lot of revenue potential there,” he said. “After all, the moon is one of the only places Chinese citizens can travel to without a visa.”

For its part, Jade Rabbit seems to be enjoying its three-month mission. At press time, it was busy scooting around, looking for the nearest Chinese restaurant.