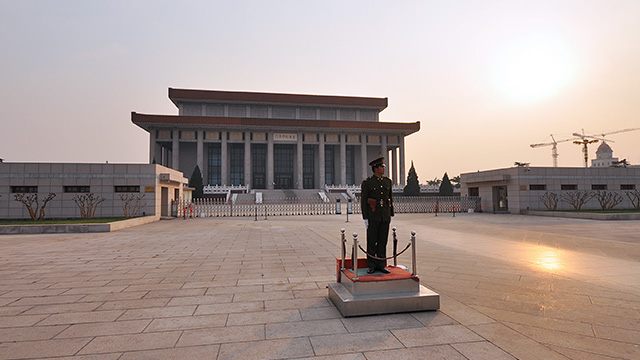 On his annual visit last week, Xi offered flowers and a short prayer to the embalmed remains of the leader in the War of Resistance Against Japan.

“We must never forget how the Great Helmsman steered the destiny of China,” Xi said in a short speech in the mausoleum. “Though he may have made mistakes, defending this nation against Japanese aggression was not one of them.”

Japanese foreign ministry spokesman Kazuo Ishinari called Xi’s remarks “deliberately provocative” and urged him not to “fan the flames of historical hatred in these sensitive times.”

“Any child who’s ever read a Japanese history textbook knows that Japan was a victim in the Second World War.”

“Any child who’s ever read a Japanese history textbook knows that Japan was a victim in the Second World War, not an aggressor,” said Ishinari. “Mao Zedong, on the other hand, was responsible for the deaths of millions of Japanese soldiers, some of whom hadn’t yet raped a single person.”

Ishinari also accused China of not taking responsibility for the crimes it committed during World War II.

“Unlike postwar Germany, China was never required to come to terms with its role in the war,” he said. “In fact, the same government launched right into conflicts in Korea and Vietnam.”

Indeed, South Korean officials have joined Japan in criticizing Xi’s decision to pay respects to a key figure in the War to Resist U.S. Aggression and Aid Korea.

“The man enshrined in that tomb had his hand in the deaths of hundreds of thousands of Koreans and ultimately condemned half the peninsula to unspeakable oppression which continues today,” said a Korean foreign ministry spokesman. “To praise such a man is an insult to humanity.”

In perhaps the strangest twist, even China’s own foreign ministry has come out against the Chinese president.

Chinese foreign ministry spokesman Hong Lei said in a statement that “it is our job to condemn any leader who visits the resting place of someone who has killed Chinese people.”

“And no one’s killed more Chinese people than Mao Zedong.”