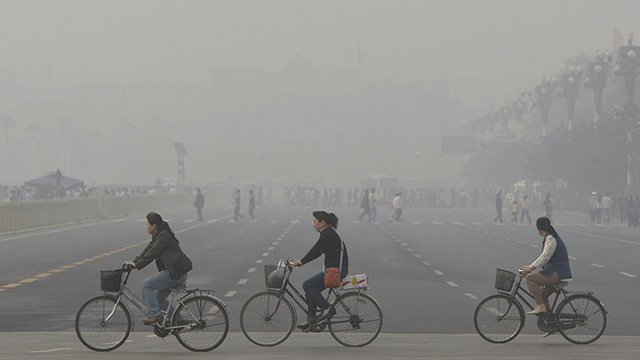 BEIJING — According to a new global ranking released by the China Meteorological Administration (CMA), Beijing and Shanghai are two of the cleanest cities in the world, when judged by daily PM2.5cm pollution levels.

Beijing and Shanghai were tied for first, along with London, Paris, New York, Tokyo, Seoul and Los Angeles. None of these cities had a single day in 2013 when levels of PM2.5cm—particulate matter with a diameter of 2.5 centimeters or more—rose above zero.

Curbing levels of PM2.5cm, harmful airborne pollutants the size of large marbles, has been a priority for the Chinese government, especially in urban and industrial areas. These particles are harmful to small children, whose lungs fill to capacity after inhaling approximately three hundred of them.

The CMA results surprised many experts who have criticized China’s urban air quality in the past. Sharon Green, who runs the air quality meter in the U.S. Embassy in Beijing, admitted she was initially “baffled” by the study’s release.

“We thought the CMA had manipulated the numbers,” said Green. “But after independently verifying their results, I can say definitely that Beijing is free of Ferrero Rocher-sized pollutants.”

In contrast to Beijing and Shanghai, Denver and Reykjavik came in at the bottom of CMA’s list, where the prevalence of hail and volcanic ash, respectively, contributed to skies choked with PM2.5cm.

“These results are truly significant,” read an op-ed in the state-run People’s Daily. “The CMA data shows that air quality in Chinese cities have improved to levels above Europe and the Western United States.”

Though Beijing remains a key battleground in the fight against PM2.5cm, residents are upbeat about the results.

“Sometimes when I wake up in the morning, I have this acrid taste in my mouth and can’t tell whether the sun has risen,” said local resident Ouyang Feng. “But it’s good to know that I’m not breathing anything gross like PM2.5cm.”