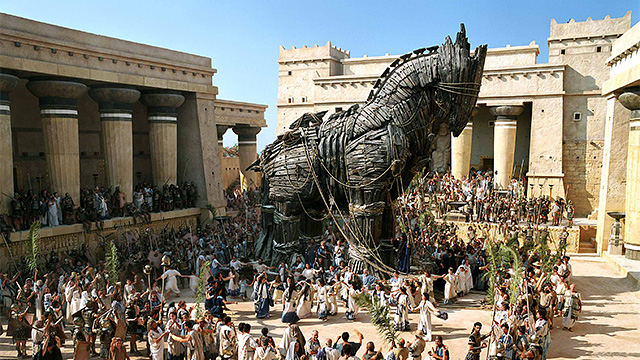 TOKYO — In an apparent easing of tensions, the People’s Liberation Army has presented the nation of Japan with a giant wooden horse in honor of Chinese New Year.

The mysterious sculpture was found abandoned on the disputed Senkaku/Diaoyu Islands just days before the Year of the Horse, and though the PLA has not officially commented on the offering, Chinese naval ships were seen withdrawing from the contested waters, ostensibly sailing back to the coast of mainland China.

According to sources, the equine stands nearly six meters tall, ten meters long and is engraved with the phrase, “For their return home, the Chinese dedicate this offering to Emperor Akihito.”

Japanese citizens were quick to celebrate this auspicious turn of events, with impromptu celebrations breaking out in Tokyo, Kyoto and other major cities.

“I fear the Chinese, even those bearing gifts.”

“It is clear the Chinese have ended their policy of brinkmanship and given up their claim to the Senkakus,” said Japanese Prime Minister Shinzo Abe. “Some sense a conspiracy, but I believe there is no need to look this gift horse in the mouth.”

However, other members of government remain skeptical.

Japanese Defense Minister Itsunori Onodera warned the public in a press conference that the giant horse was a trick, proclaiming, “I fear the Chinese, even those bearing gifts,” before being strangled by a sea serpent.

Despite the late Onodera’s protestations, the offering was towed into Tokyo Bay and last seen being pulled within the towering walls of the Imperial Palace, where it will be kept as a token of friendship between the two nations.