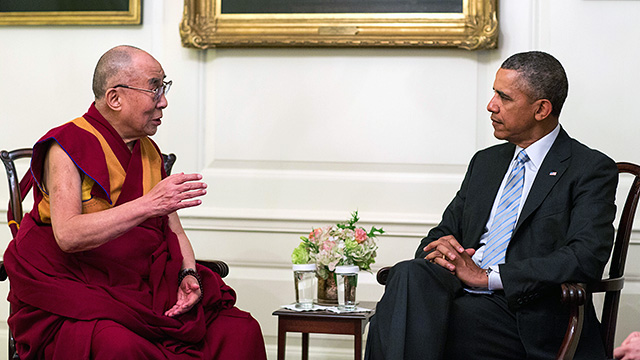 WASHINGTON, D.C. — An ailing, once-great leader living in political exile met with the Dalai Lama at the White House on Friday.

According to sources, the aging symbol of a bygone era of hope and tolerance looked drained as he shook hands with the elderly monk in a run-down palace, whose whitewashed walls masked the corruption and infighting that has reduced the erstwhile empire to a shadow of its former self.

Speaking haltingly through an interpreter, the increasingly irrelevant leader of a political non-entity told the Dalai Lama that he would “continue to support the cause of human rights and dignity,” though his words rung hollow like an empty mantra as his government continued to foment instability in sovereign nations around the world.

“I hope that my counterpart will live to see his people liberated and his culture resurgent.”

Behind closed doors, the man who once brainwashed an entire generation of impressionable youth into believing his naive message of peace and reconciliation, only to let them down, coughed his way through sentences and repeatedly lost his train of thought, as if senility were getting the best of him.

Perhaps the fading politician was contemplating how long he could maintain this charade of authority while his political enemies oppressed his people and ripped his beloved country apart. More likely he was giving thought to the friends who had long deserted him, seduced by the profits to be made from supporting his adversaries.

Press in attendance couldn’t fail to notice the careworn, haggard expression borne by the broken commander-in-chief as he stood alongside the Living Buddha, his eyes betraying naked envy even as he mouthed vapid pleasantries.

After returning to his official residence in Dharamsala, India, the Dalai Lama told reporters that he was “deeply affected” by what he saw on his trip to America.

“It was humbling to meet such an eminent spiritual leader in the flesh,” said His Holiness. “I hope that, even with things as they are, my counterpart will live to see his people liberated and his culture resurgent.”


RELATED NEWS:
CCTV: "Edward Law Assured Us He Was Only Into Normal Porn&qu...
PLA Navy Withdraws from North Sea After Scotland's "No"...
STUDY: U.S. Now More Racist Against Blacks than China