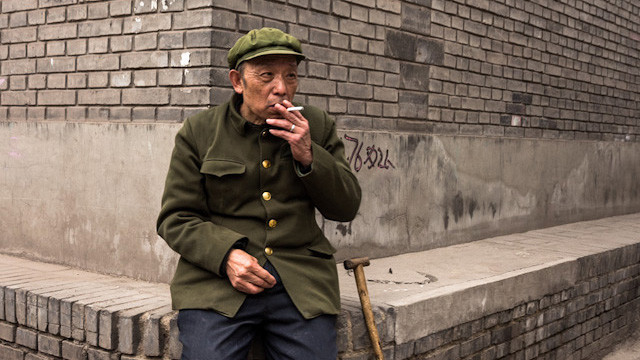 BEIJING — At a family dinner on Tuesday, area grandfather Yang Jun reminisced about the days when, as a young man, he was able to look up and see the sky.

“It must have been ’43,” the octogenarian said, slipping into a wistful memory. “You’d look up and see this endless blue dome covering the earth. We used to call it ‘the sky.'”

“Sometimes he tells this cock-and-bull story about how he used to drink water straight from the tap.”

Family present at the dinner were incredulous at Yang’s yarn about an azure halo beyond the uniformly gray cloud of smog that has blanketed the city for decades.

“Dad’s getting older and is starting to babble,” Yang’s eldest son explained to reporters. “Sometimes he tells this cock-and-bull story about how he used to drink water straight from the tap. The kids almost tried it.”

Yang’s two grandchildren listened in amazement as the old man recounted how, in elementary school, he and his classmates used to look at masses of condensed water vapor known as “clouds” suspended in the heavens, likening them to animals and other objects.

“Granddad’s always telling these tall tales,” said Yang’s granddaughter. “About how there used to be a ‘sun’ during the day and ‘stars’ at night. But they’re just stories.”

At press time, Yang’s sons decided their father had finally lost it and agreed to send him to an old folks home first thing in the morning.