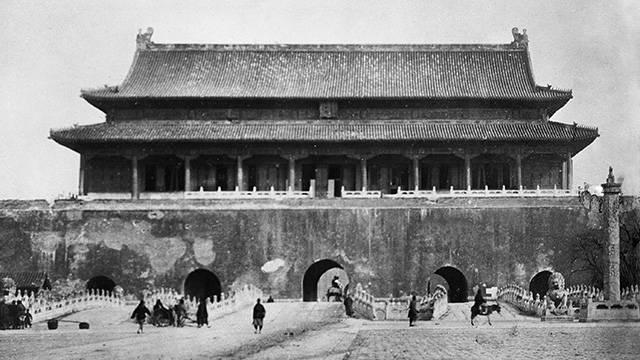 BEIJING — Announcing that “there’s more folks needing our help out yonder,” Wang “The East is Red” Qishan, the most infamous member of the Politburo Posse, mounted his horse and lit out for parts unknown, sources confirmed Sunday.

Wang has gained his fair share of notoriety since moseying into Old Peking alongside Xi “Deadeye” Jinping and Li “Babyface” Keqiang last year, especially after taking out crime boss Bo Xilai and his slack-jawed gang of rum-runners.

The Politburo has since taken personal charge of cleaning up this filthy one-horse town after former Sheriff Hu Jintao took “early retirement” after a steamboat brawl over some fancy piece of Tianjin tail.

Since pinning on the red star, Wang has personally dispatched eight ministerial level officials, eighteen deputy ministers, 13,000 cadres and an unspecified number of varmints, vagrants and ne’er-do-wells, most in a hail of cold lead.

However, since the notorious gunfight in early march, known among the townsfolk as Zhongnanhai Noon, which saw Zhou Yongkang and his Hard Left Gang pumped full of holes and Old Zhou himself sent up that dusty trail to Boot Hill leakin’ scarlet, the posse have openly spoken of lighting out for parts unknown.

Nevertheless, it came as a surprise when Wang, flanked by his fellow posse members, appeared outside the Great Saloon of the People in Old Peking’s town square, where he told the dismayed villagers that it was time for his compadres to “fight tigers in the wild blue.”

“We’ll miss you gentle folk, but know that wherever we are, we’re lickin’ ’em in name of Old Chokey.”

“Now that our annual Two Hootenannies are done, it’s time for these three amigos to mount up and ride,” remarked Wang, toking a cheroot and squinting against the rosy gloam. “We’ll miss you gentle folk, but know that wherever we are, we’re lickin’ ’em no-good corrupt sons of bitches in name of Old Chokey.”

Then, with a wink to the comely ladies in attendance, several of whom swooned, the three turned their steeds and cantered into the sunset, passing round a bottle of firewater, leaving the uneasily silent city behind them.

“What ever shall we do for law and order now they’ve gone?” wailed Big Mama Lu, proprietress of the Sanlitun Coachhouse, clasping a lace handkerchief to her ample bosom. “Without those three shinin’ angels and their steely justice, how I know lowlifes ain’t gonna trot back through my doors and hassle my girls?”

Other Peking residents, however, were more sanguine.

“Those boys had sharp eyes and steady hands,” remarked one old timer named Chen, sitting on the weather-beaten stoop of his Dongzhimen lean-to. “But mark my words, trouble follows them like stink follows shit.”

He crinkled his eyes as the last rays of sunlight splintered across the wagon-rutted thoroughfare.

“Still,” he added, “those fellers sure knew how to jangle this town’s spurs.”

At press time, the posse were reported to be heading for Shanghai Gulch at a fair gallop.