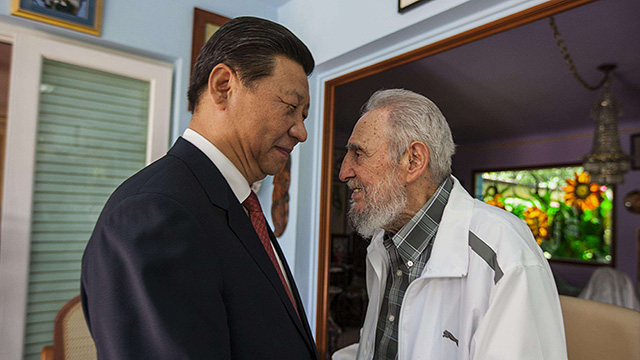 Authorities in Havana handed down a lifetime ban to the Chinese leader, dashing his hopes of ever returning to the Caribbean island.

According to sources, Xi was invited to visit Castro as a gesture of friendship and the two spent over an hour in close discussion before Xi asked to be excused “to visit the bathroom.”

After an absence of 15 minutes, Castro dispatched two bodyguards who discovered Xi in the upstairs library, attempting to pick the lock on the case in which the  revolutionary leader stores his secret to everlasting life.

“Comrade Xi’s illegal attempt to receive free medical care in Cuba left us no choice but to bar him from these shores in perpetuity.”

Xi was forced to the ground and allegedly screamed, “Give it to me you decayed bastard!” before being bundled into a government vehicle and escorted to the airport where he was wrestled onto a plane bound for Beijing.

Cuban government spokesman Manuel Vasconcellos later told the Havana Times that “Comrade Xi’s illegal attempt to receive free medical care in Cuba left us no choice but to bar him from these shores in perpetuity.”

The Chinese government has refused to comment on the incident.

Castro’s elixir of life, first synthesized by Cuban scientists in 1976, is reportedly a mixture of pure tobacco, high-quality dark rum and minerals found only in the sweat of members of the Buena Vista Social Club.

The tincture is administered to the 230-year-old Castro twice daily and has kept him seemingly immune to disease, old age and exploding cigars for more than three decades.

While China is allegedly attempting to create its own longevity potion for the exclusive use of top officials, its current formula—based on cadmium, tiger penis and the marrow of political prisoners—has so far only caused massive weight gain.