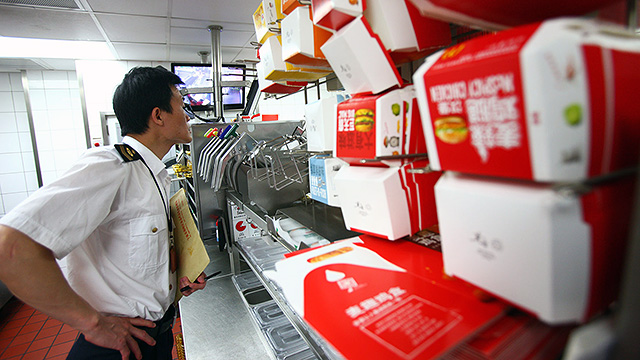 McDonald’s spokesperson Gemma Gross told reporters that the company was taking the allegations very seriously and had already launched a McInquiry to obtain further information.

“When customers purchase McNuggets in China, they expect to consume a deep-fried nugget of crisp batter filled with a tender, chicken-like substitute,” she said. “They do not expect to consume genuine chicken meat.”

“When customers purchase McNuggets, they do not expect to consume genuine chicken meat.”

Gross reassured customers that preliminary tests had confirmed the presence of more familiar ingredients such as wheat gluten, the anti-foaming agent dimethylpolysiloxane and shredded cardboard.

The news comes at a difficult time for the ubiquitous fast-food giant as local Chinese chains such as Harmonious Chicken Citizen are increasingly encroaching on its market.

Mandatory food safety improvements have also cut into the brand’s profits, along with a recent public health law which decreed that hamburgers must be less than 10% rat meat.

For their part, McDonald’s has stopped selling chicken sourced from its domestic supplier, leading to a shortage of McNuggets.

When asked about the shortage, Gross urged Chinese customers to try the other chicken products on the menu, such as the McChicken and Spicy Chicken Burger.

“As far as we know,” she said, “they are still completely chicken-free.”