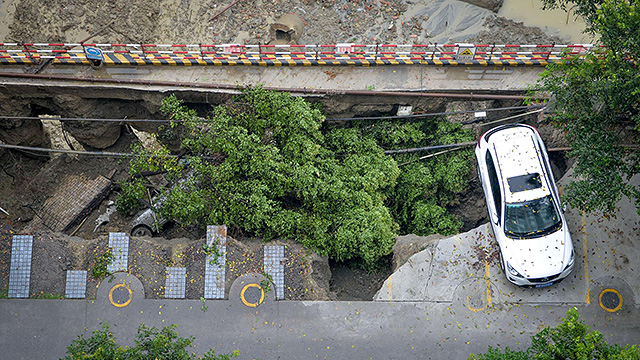 SHANGHAI — In an unprecedented expansion, the Shanghai municipal government announced Friday that it was embarking on an ambitious infrastructure project to add six new parking spaces to the metropolis, which are expected to enter service by 2017.

The announcement came as cities across China have resorted to increasingly drastic measures to curb congestion, such as license plate lotteries, limiting car use on weekdays and cracking down on unlicensed and illegally registered vehicles.

“By mid-century, there will be a parking space for every 18,000 residents with private vehicles.”

While China’s sidewalks have traditionally been used as makeshift parking spaces for the few citizens who can afford private cars—forcing pedestrians to use bicycle lanes and the roofs of low buildings—cities have recently attempted to add specially designed parking areas in order to free up more urban space.

“In only a few years, the probability of finding an empty parking space near your destination in Shanghai will drop from 1 in 120,000,000 to 1 in 89,000,000,” said Ministry of Transportation spokesman Yang Liang. “We expect that, by mid-century, there will be a parking space for every 18,000 urban residents with private vehicles.”

The announcement was part of a raft of new measures to curb traffic congestion and free up Shanghai roads. Other reforms include:

Yang also mentioned that the government would continue to enforce the “shoot to kill” policy on Shanghainese who continue to drive off-road vehicles on the city’s flat roads.