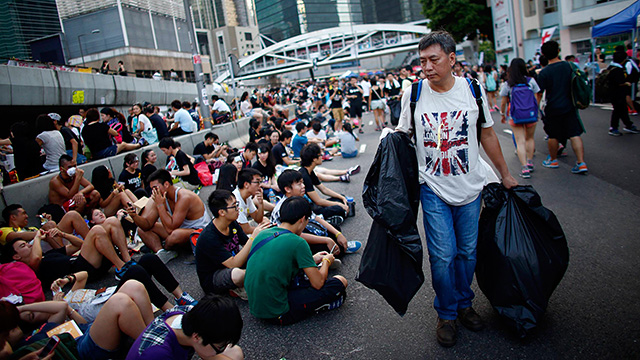 HONG KONG — As the democracy protests in Hong Kong enter their second week, sources say the number of drum circles in the city has reached critical levels.

Drawn to the freewheeling, Occupy-style protests, thousands of itinerant drummers have set up shop among the protesters in Wan Chai and Causeway Bay.

Initially, the tabla-toting newcomers were welcomed by protesters but their incessant thumping quickly alienated both organizers and participants. Some feared that the never-ending percussion would spark a backlash among local residents and prompt police retaliation.

Sources say the cacophony in Wan Chai has reached 1.6 zuccottis and continues to build.

Indeed, Hong Kong Police Commissioner Andy Tsang told reporters Thursday, “We tolerated the establishment of a lending library, but if this arrhythmic banging continues we will forcibly clear the affected areas.”

But the freestyle jam sessions show no sign of abating. Sources on the ground say the cacophony in Wan Chai has reached 1.6 zuccottis and continues to build.

On the same day as Tsang’s press conference, state-owned newspaper People’s Daily published an editorial that denounced the unrest and pointed to the drum circles as clear evidence of a Western conspiracy.

“The Chinese do not percuss,” the author wrote. “These can-banging insurgents want to destroy China and turn it into one giant Burning Man.”

At press time, protest leaders attempted to use the people’s microphone to debate the necessity of drum circles, but their arguments could not be heard over the din.