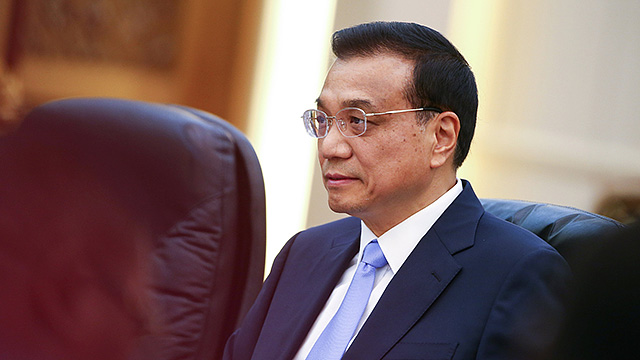 BEIJING — According to multiple eyewitnesses, Chinese Premier Li Keqiang is currently loading China’s entire national budget for Q3 and Q4, 2014 into a Bank of China ATM near Tiananmen Square.

The bespectacled politician was seen loading over 7 trillion yuan in new 100 yuan bills directly into the machine, printing a receipt for every 10,000 deposited.

This unprecedented task is just the latest reform by President Xi Jinping to fight endemic corruption.

In an internal directive issued last month, Xi required all officials to collect tax revenues “in cash and in person” before traveling to Beijing and laying the monies at his feet in the Great Hall of the People.

As per the directive, the president then counts each bill by hand to make sure all revenues are accounted for, before handing the sum to Li. The premier then deposits all the money into a single account at the nearest Bank of China ATM before parceling out funds directly to local and provincial governments.

By reducing the number of actors who handle the budget, corruption could be reduced anywhere from 70 to 90 percent.

By reducing the number of actors who handle the national budget, Xi claimed corruption stemming from the central government could be reduced anywhere from 70 to 90 percent.

According to Xi, using a single account to redistribute wealth also allowed the government to “avoid costly and inconvenient fees and charges.”

A local woman surnamed Wang said she was shocked to see such a high-ranking politician doing such a menial task himself.

“I got to the ATM on my lunch break hoping to pay my company’s entire payroll only to find some asshole got there first,” Wang said.

Today marked the first time Li has executed his new role as sole dispenser of national revenue. According to sources in line behind him, Li apparently plans to perform his task entirely via an ATM near the gift shop of the National Museum.

Those close to the premier have expressed concerns for his mental health, as Li is also responsible for making the 1.2 million separate electronic transfers to ensure the exact funds reach their intended destinations.

Li is expected to complete the task sometime in November.