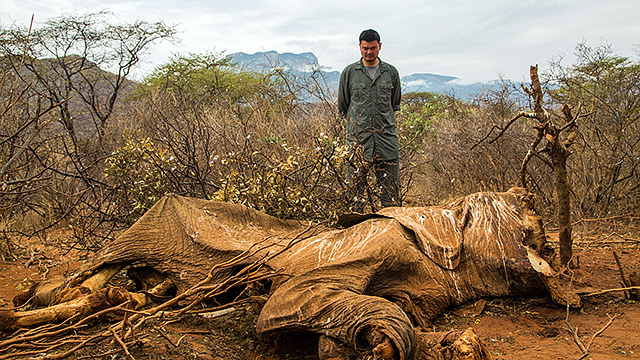 The longtime anti-poaching activist was reportedly feeding on vegetation near one of his preferred watering holes in Aberdares National Park when he was ambushed by hunters, who shot him three times with a high-powered rifle.

The poachers then sawed off Yao’s large, alabaster tusks and left the carcass in the bush, where it was discovered by park rangers the following morning.

“I recognized that hulking silhouette immediately, even in the dawn light,” said ranger Julie Girrach. “I secretly hoped it would be another member of the herd and not the former Houston Rockets player, but as soon as I saw that square jaw, I knew.”

An inspection of Yao’s carcass revealed scars suggesting that the former Laureus Breakthrough of the Year Award winner had been shot several times by poachers in the past, but the low-caliber weapons used had prevented the bullets from penetrating his thick hide.

The prized tusks of the popular WildAid ambassador, valued at several hundred thousand dollars apiece, were sawed off at the root, and are likely destined for the international black market.

A spokesperson for the Kenyan government announced that Yao wanted to buried along with other members of his adoptive herd in the “elephant graveyard” maintained in Aberdare, although the Chinese government has requested that his skeleton be repatriated to facilitate further study of his species.

World-class basketball players are critically endangered in China, and the domestic breeding program has lost countless specimens to the NBA draft.

For Yao’s former wardens, however, nothing can lessen the grief of losing one of their most popular companions.

“Yao will most likely end up on some Chinese CEO’s mantelpiece,” said Girrach. “Few people understand there’s more beauty to be found in watching a magnificent beast like Yao for five minutes in the wild than a lifetime of staring at some ivory Buddha gathering dust on a shelf.”

This is not the time a WildAid spokesperson has fallen victim to illegal poaching. In 2012, kung fu star Jet Li was caught in a net and finned by unlicensed shark fishermen while swimming off his yacht in the South China Sea.