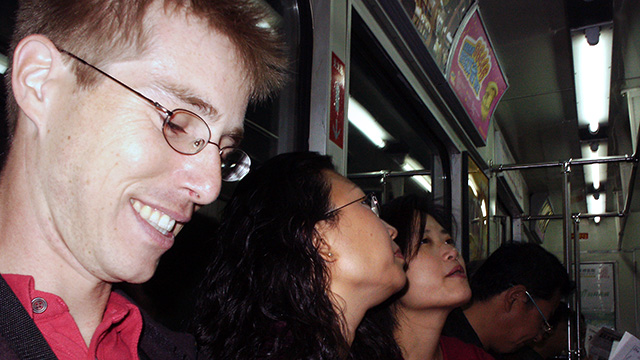 BEIJING — While traveling on the Line 10 subway after finishing his tutoring work Monday evening, Beijing-based Jake Gryczynski spent approximately 35 seconds attempting to decipher a loud conversation between two middle-aged Chinese women before deciding that what they were saying was “probably racist.”

The 37-year-old Idaho native, who has yet to learn more than rudimentary Chinese despite working in China for 15 years, went so far as to remove one iPod earphone and tilt his head slightly in an attempt to better distinguish individual syllables from the stream of idiomatic Mandarin that, he concluded with complete confidence, was more than likely a scathing and expletive-ridden diatribe against him and the entire Western world.

“Sure, my Chinese is pretty basic, but I picked out the words, ‘America,’ and ‘not good,'” he said. “It doesn’t take Noam Chomsky to figure out they were laying into American and white European culture.”

“It doesn’t take Noam Chomsky to figure out they were laying into American and white European culture.”

“The thing about Chinese people,” Gryczynski continued, “is they think you don’t know exactly what they’re talking about. They think you’re just an ignorant schmo who will blithely sit there while they systematically undermine your culture and spit on your heritage.”

Gryczynski went on to explain that he “didn’t want to cause a scene,” so he merely glared at the two women and flipped them off while exiting the carriage, expressing satisfaction that “the looks on their faces told me they got the message.”

“They’re gonna think twice before deriding the noble tradition of Western democracy again, or calling me a pasty turd, as I’m certain they were doing on that occasion,” he said.

Chinese passengers on the same train, however, expressed puzzlement at Gryczynski’s behavior.

“I thought he had mental problems,” said commuter Wendy Tang, who was reportedly sitting opposite Gryczynski during his brief journey. “He kept clearing his throat loudly and eyed everyone in the carriage like we were going to kill him.”

“The worst thing was when he gave the finger to those two nice ladies who were worried that Americans couldn’t make a good living in China,” said Tang. “I guess they noticed that he hadn’t showered in a while.”

In related news, a two foreigners were assaulted in Sanlitun over the weekend when a Chinese clubgoer thought he made out the words “fuck” and “China” in a conversation between two expats.