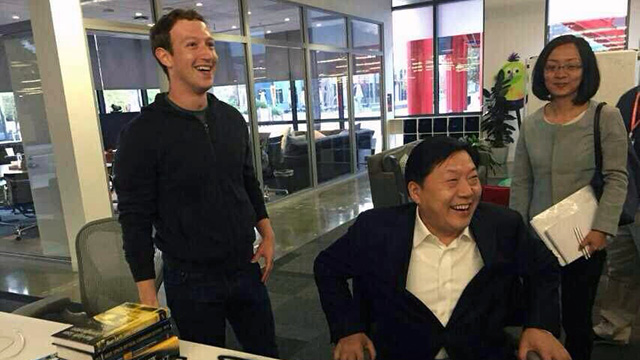 BEIJING — This week, photos surfaced which show American tech leaders rolling out the red carpet to welcome Lu Wei, the Chinese official responsible for blocking their sites, keeping their sites blocked and perhaps blocking them in the future.

At Facebook headquarters, CEO Mark Zuckerberg gave Lu a tour of his office and showcased all kinds of features that the latter would never allow his countrymen to use.

“It was so great to meet the man who will continue to keep Facebook blocked, despite my shameless pandering,” said Zuckerberg.

“It was so great to meet the man who will continue to keep Facebook blocked.”

Lu received a similarly warm welcome at Apple, where CEO Tim Cook demoed the new Apple Watch, which the Chairman of the State Internet Information Office had no intention of ever using.

“Though Apple has had a great partnership with China so far, [Lu] assured me that at some point in the future he planned to place arbitrary restrictions on our iTunes service, unilaterally and without warning,” said Cook. “What a great guy!”

For his part, Amazon CEO Jeff Bezos lauded Lu’s “extraordinary vision” and had nothing but praise for “the man tasked with enacting the Chinese government’s protectionist policies to restrict the spread of foreign competitors like Amazon in order to promote domestic firms.”

“I hope he visits us again,” Bezos added.

According to sources present, Lu very much enjoyed his trip to the West Coast and lamented he didn’t have time to stop by Twitter, Google, LinkedIn, or any of the other hundreds of sites he planned to keep blocked or was thinking of blocking.