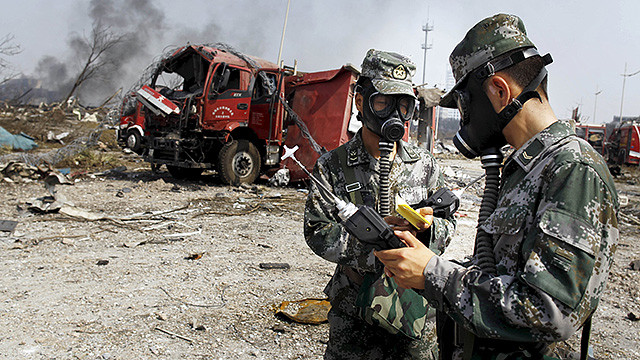 BEIJING — In the wake of the massive chemical explosions in Tianjin last week, Chinese authorities have established a two-kilometer exclusion zone around all civil servants in the Tianjin area, effective Monday.

The disaster has already claimed the credibility of several Tianjin city officials and rescue teams are working around the clock to prevent dangerous suspicions from leaking into the public sphere.

The newly established zone will keep volatile officials at a minimum safe distance from inflammable questions, harmful muckraking and potentially dangerous assignation of responsibility, ensuring that the survivors of last week’s meltdown are shielded from any and all accountability.

Rescue teams are working around the clock to prevent dangerous suspicions from leaking into the public sphere.

“This zone was created in the interest of safety,” city spokesman Gao Xuanbo told reporters, urging them to stay behind the tape barrier which now surrounds all government officials registered in the city.

“We don’t know what further devastation could ensue if journalists come into contact with the highly unstable minds and mouths of our urban officials,” he added. “The only option is to isolate those people from all contact with the press and general public until they no longer pose a threat to our efforts to suppress relevant information.”

However, despite the establishment of the exclusion zone, several reporters and independent activists have pledged to cross the barrier in search of missing facts believed to still be trapped in what has quickly become an ethical quagmire.

“You can’t expect us to sit idly by while potentially life-saving information is left to die,” remarked Southern Weekday reporter Luna Li. “I’m going to wrest the mangled, decrepit remains of Chinese journalism from that hell on earth even if it means my career.”

Though Gao admitted he did not have the resources to prevent citizens from entering the zone, he urged people to stay away, cautioning that any persons or information found within the exclusion zone was likely to be “highly radioactive.”

Calls to those officially responsible for anything remotely associated with this story went unanswered.