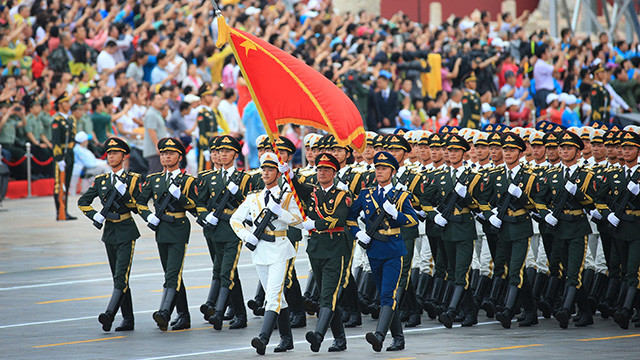 Banners have been suspended from bridges across the city, urging citizens to “Celebrate liberation from martial law by warmly submitting to martial law,” while others proclaim, “Join with the party and military to celebrate their appropriation of Japanese militaristic oppression.”

Yesterday’s massive military parade saw 120,000 heavily-armed soldiers goose-stepping through the city center in honor of the veterans who fought off the Japanese threat so that Beijing would never again be brought to a standstill by the arbitrary military posturing of a repressive regime.

“China has shown the world what absolute control over its people look like,” Russian president Vladimir Putin told reporters after the parade. “Despite running the Chinese economy into the ground and asking a nation to turn a blind eye to the explosions in Tianjin, they’ve still brought the capital to a standstill with nary a peep of protest.”

“It’s the kind of thing someone like me can only dream of,” he added.

A number of dictators and absolute monarchs were present to observe the parade, which was designed to celebrate the liberation of downtrodden peoples lawlessly ruled by out-of-touch military fanatics. A cheerful Putin shared the rostrum with top Chinese officials, along with representatives of the Saudi royal family, a handful of Somali pirates and foreign relations officials from ISIS.

“Sometimes I forget whether we won or lost the war.”

Some of Beijing’s older residents who were alive during the war were hit with a wave of nostalgia as they watched the parade they were not allowed to attend from home.

“It takes me back,” remarked 87-year-old Li Qun, who witnessed the city’s occupation by Japanese troops. “Bombers darkening the skies, being kept prisoner in my own homes and an illegitimate, authoritarian state with no public accountability crowing about its imaginary achievements—it’s just like 1937.”

“Except back then we owned our own land and my father was able to run a small business without the say-so of a government bureaucrat,” she continued.

“Sometimes I forget whether we won or lost the war,” she added, before being bundled into the back of an unmarked van by a group of masked men.